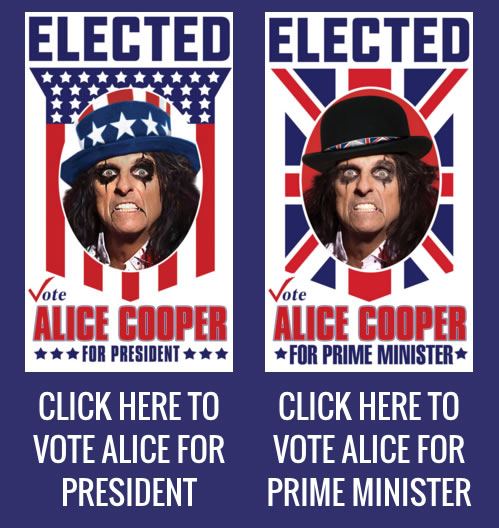 Alice Cooper is running for President and Prime Minister, with a campaign slogan of “Make America Sick Again.”

“Alice Cooper is tired of the rhetoric, the mudslinging, the media frenzy,” reads a prepared statement. “Keeping his snake in his cage and the guillotine in storage, he is putting people before career. Alice Cooper wants to be elected.”

1. Getting Brian Johnson back in AC/DC
2. A snake in every pot
3. No more pencils, no more books
4. Adding Lemmy to Mt Rushmore
5. Rename Big Ben “Big Lemmy”
6. Groucho Marx on the $50 bill
7. Peter Sellers on the £20 note
8. Cupholders required for every airplane seat
9. Ban on talking during movies in movie theatres
10. Ban on taking selfies, except on a designated National Selfie Day

In honor of his presidential bid, Cooper has released a new version of his song “Elected,” which you can stream.