March 24, 2001 – A stretch of road on Highway 19 in Macon, Georgia, is named Duane Allman Boulevard, near where the Allman Brothers guitarist died at age 24 in a motorcycle crash on October 29, 1971. March 24, 1962 – Mick Jagger and Keith Richards perform their first paid gig when they appear as Little Boy Blue & […]

March 23, 1969 –  30,000 people attend the “Rally For Decency” in Miami at the Orange Bowl after Jim Morrison was charged with indecent exposure in the city.  Countering the counter-culture, announcements publicizing the rally warn that “longhairs and weird dressers” won’t be let inside. Celebrities at the event included Kate Smith, Jackie Gleason, The Lettermen […] 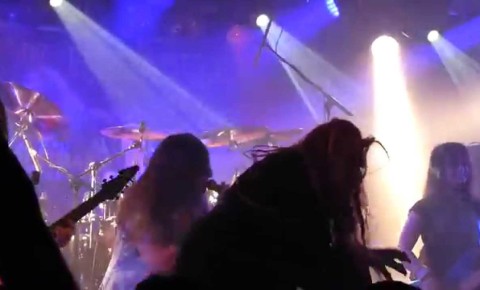 March 20, 1969 – John Lennon marries Yoko Ono at the British Consulate Office in Gibraltar. Lennon said at the time, “We chose Gibraltar because it is quiet, British and friendly. We tried everywhere else first. I set out to get married on the car ferry and we would have arrived in France married, but they wouldn’t […]

March 19, 2001 – Aerosmith, Queen, and Steely Dan are among those inducted into the Rock And Roll Hall of Fame. Kid Rock inducts Aerosmith, Dave Grohl of Nirvana and the Foo Fighters inducts Queen,and Moby inducts Steely Dan. March 19, 1974 – Jefferson Airplane reform and become Jefferson Starship. They later drop the Jefferson and become Starship in 1984.  The new/old […]

March 18, 1978 – An estimated 350,000 rock fans attend the largest festival of the 70’s, California Jam II in Ontario, California. Performers include Aerosmith, Ted Nugent, Foreigner, Santana, Heart, Frank Marino & Mahogany Rush and Rubicon, featuring a young Jack Blades. March 18, 2002 – The Ramones and Tom Petty & the Heartbreakers are among those inducted into the Rock […]

March 17, 1998 – Van Halen release Van Halen III, their eleventh studio album.  It is the only album with former Extreme lead singer Gary Cherone, and the only album to not attain platinum status. March 17, 1985 – Serial killer Richard Ramirez kills a man and leaves an AC/DC hat behind at the crime scene. Ramirez […]

March 16, 1992 – A Metallica show at the Orlando Arena goes horribly wrong when fans dangle an usher by his ankles from the balcony.  Luckily, he was pulled to safety. The band paid $38,000 to repair damaged seats and have all the arena seats steam cleaned after the rowdy concert. But, everyone ended up happy (well, maybe not the […]