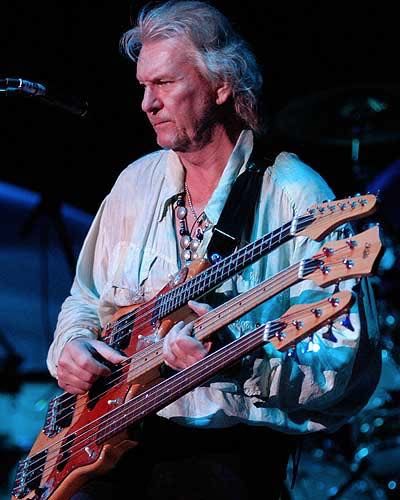 Members of YES, Rush, Black Sabbath and more have paid tribute to legendary YES bassist Chris Squire, who has died at the age of 67 of leukemia.

Squire co-founded Yes in 1968 with singer Jon Anderson. Squire was the only member to appear on each of their 21 studio albums, released from 1969 to 2014.

YES will be honouring their commitment to their North American summer tour with Toto, as well as confirming their performances on the Cruise To The Edge in November. Chris’s role in the band will be covered by YES alumnus Billy Sherwood.

While Squire remained a part of every one of the band’s numerous lineups, Anderson parted way with the group three times, including a rather acrimonious and seemingly final departure in 2008. Happily, in his letter Anderson reports that the pair had made a peaceful reconnection recently. You can read Anderson’s full statement, posted on his website, below:

Chris was a very special part of my life; we were musical brothers. He was an amazingly unique bass player – very poetic – and had a wonderful knowledge of harmony. We met at a certain time when music was very open, and I feel blessed to have created some wonderful, adventurous, music with him. Chris had such a great sense of humor… he always said he was Darth Vader to my Obiwan. I always thought of him as Christopher Robin to my Winnie the Pooh.

We travelled a road less travelled and I’m so thankful that he climbed the musical mountains with me. Throughout everything, he was still my brother, and I’m so glad we were able to reconnect recently. I saw him in my meditation last night, and he was radiant. My heart goes out to his family and loved ones.

Others chimed in, issuing condolences on their websites and social media accounts.

Rush’s Geddy Lee: “Although we never met, I’m so sorry to hear about Chris Squire from Yes passing. As a bass player and innovator on the instrument he was a huge inspiration to me. Simply put, he was one of the greatest rock bassists of all time. My most sincere condolences to his family and friends.”

Black Sabbath’s Geezer Butler: “Shocked to hear of the passing of Chris Squire, one of the great bass players. RIP.”

Matt Sorum (Velvet Revolver, Guns N’ Roses, The Cult): “Lost the great bassist Chris Squire of Yes today, he was an incredible visionary in the progressive world and a very kind man, he was actually the first rockstar I met in 1974. I was 14 and snuck backstage with my friend , he gave us passes and let us stay. Later in life we crossed paths in Hollywood and I ended up jamming with him long hours in the hills at his home in Laurel Canyon over drinks and other assorted fun. We dove into musical expression and many laughs along the way. He challenged me to learn the entire album Tales from Topographic Oceans which is a tough being it is four songs of 20 mins each. I gave it my best shot and ended up at Chris’s house for three days playing it. The progressive world has lost a Giant today, I’m glad I was able to make some incredible noise with you fine sir and will see you on the other side someday.”

Adrian Belew (King Crimson): “I’m sorry to hear that Chris Squire is gone. He was a great player in one of the best rock bands ever. He forged his own unique style, something few musicians can say. Chris came to hear The Bears once and loved the band. Later he said in an interview The Bears were the most exciting live band he’d heard since The Who in the 60’s. A huge compliment. Speaking of The Who, I know the three bassists who influenced a young Julie Slick were Jack Bruce, John Entwhistle, and Chris Squire. All greats of their time. It’s your time now Julie, and you deserve it.” 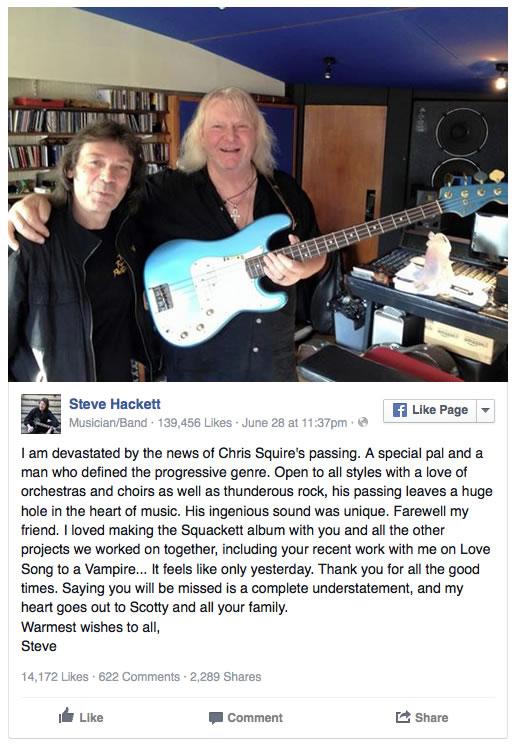 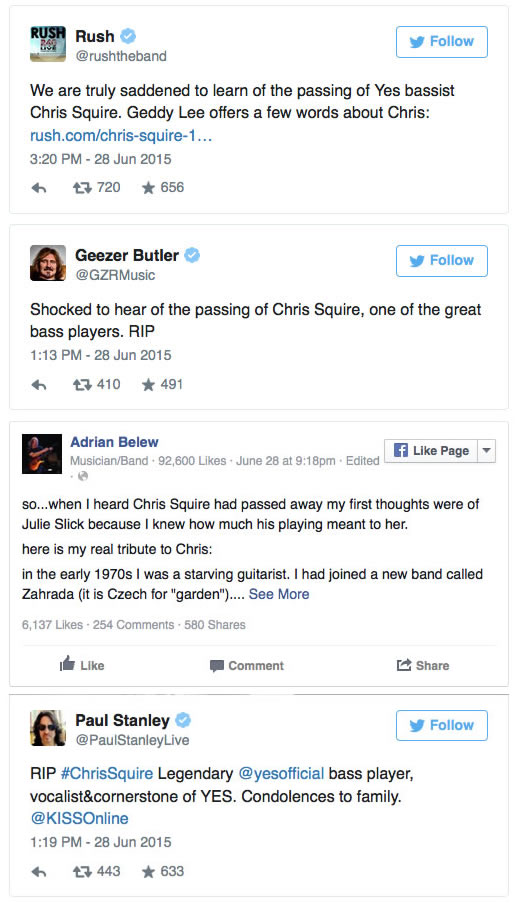 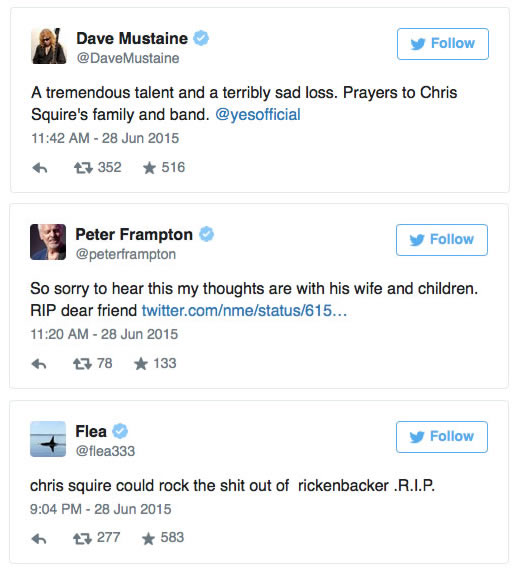