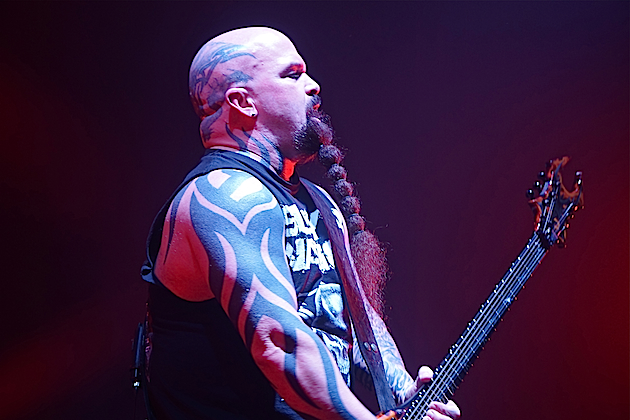 Recently, Mayhem Festival co-founder Kevin Lyman spoke about this year’s issues with booking of the metal festival. He commented in an interview that the metal genre was becoming “gray, bald and fat” while addressing the difficulty in booking metal festivals and calling out some of the top billed acts for not cutting any financial slack to help move the scene forward. Eventually Lyman apologized for the remarks, but Slayer‘s Kerry King, whose band is headlining this year’s Mayhem Festival, has not held back in commenting about the issue.

Speaking with Metal Insider he said, “Do I know this tour wasn’t booked correctly? Absolutely I know this tour wasn’t booked correctly. Gary Holt made the comment that usually there’s the Main Stage, a second stage, a third stage, and then that piece of s–t record stage…now what they’re calling a second stage is at best a fourth stage and they’re wondering why people aren’t showing up. I think they waited too long and think all the talent that could have been on this took gigs in Europe. Because there’s nobody here touring. It’s easy to fill these stages but I guess they wanted a different price point, take away the second and third stage, which I think had a lot of value. To me a second stage headliner is Anthrax, Machine Head…Whoever booked this made a gigantic error.”